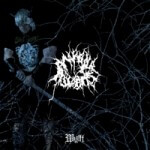 I’m not sure it’s possible to be any further removed from the mainstream than Ankou Awaits. Operating on the very periphery of the Black Metal underground – about a million miles and as many aeons from actual civilization – Ankou Awaits is a unique entity, a musical maverick, a law unto itself, a one-man operation that epitomises the most positive facets of the DIY etiquette synonymous with our beloved sub-subgenre.

On his third full-length in as many years, the irrepressible Thomas Eversole has forged together six more slabs of discordant, disjointed, asymmetrical, chaotic Black / Death that takes on a life all of its own. In recent years, I’ve encountered very few artists who’ve managed to conceive a style / sound all of their own, but Ankou Awaits is one such force.

He ploughs a lone furrow, following his muse and remaining blissfully unaware of / immune to all trends and expectations of what Black Metal should be. There’s more variety on ‘Wyllt’ than there was to be found on either ‘Lebor Gabala Erenn’ or ‘Crog Buidhe’, which means that things can become even more disjointed, muddled, random, murky and generally all-over-the place than on the predecessors.

If you like your Black Metal ‘by-the-numbers’, then don’t approach this. It’s complete fucking madness from start to finish, boasting some of the most incongruous song structures known to man or beast. This is one strange journey and it can become a difficult one at times but I think it’s refreshing to find something so genuinely odd in today’s dot-to-dot musical landscape. Love it or hate it, Ankou Awaits will certainly make an impression on you. And that’s what we need; to be moved.