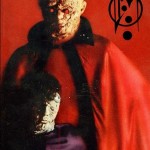 I ordered this cassette – along with five others – from the label on August 2nd. In the meantime, Crepúsculo Negro closed down. However, the people who ran this label have clearly decided not to honour their prior commitments and have sent me nothing in return for my hard-earned cash.

Even though I have written positive things about their previous releases (which is irrelevant, I admit) and even though I have paid them a total of $65, they won’t answer my emails or afford me the tiniest modicum of respect. This sort of behaviour is scandalous. It flies in the face of decency and common courtesy. How difficult would it be to send on the cassettes that are paid for? I mean, it’s not like they have huge intrinsic value.

I’m not sure what the future plans of the individuals behind this label are but I will certainly in turn be affording them the respect they deserve and avoiding them like the plague. Even if, by some miracle, the tapes were to arrive eventually (highly unlikely), the behaviour of the label has been truly pathetic.