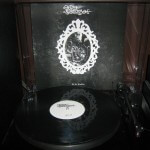 From the same mind that conceives Cosmic Church comes Aura Saturnal, one of the rawest and most thoroughly underground Finnish Black Metal acts you are likely to hear this side of the grave. The driving force behind these bands – one Luxixul Sumering Auter – draws a very distinct line between the two personae and Aura Saturnal as represented here on its debut LP is clearly the freak child that grew up in the basement. An ugly bastard that was hidden from the outside world for obvious reasons. Imagine the disgust and revulsion that would be caused if any of the neighbours saw him…

‘To His Kingdom’ is barely-decipherable, coarse, muddy, dull, murky but strangely melodic and addictive. I’ve tried reading along with the lyric sheet in hand on quite a few occasions but I keep losing track because words seem to just vanish into the ether, or don’t exist in the first place. The sound is wholly inadequate, fluctuating and swirling … but in a way that works superbly. Well, at least I enjoy it.

Obviously, this album isn’t going to be for everyone. It’s a challenging listen and it’s rougher around the edges than a tramp’s underpants. But it is also intriguing, unusual and highly rewarding once you invest a bit of time into it. A tad short at 36-and-a-half minutes but, all in all, a highly satisfying mid-paced obscure Black Metal record.