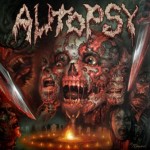 Inevitably, the mighty Autopsy are starting to show their age. Twenty-four years since they exploded onto the Death Metal scene with the peerless ‘Severed Survival’, Chris Reifert and his cohorts spew out a sixth full-length and in truth – though it pains me to admit it – the magic is well and truly gone.

Autopsy is without doubt one of the greatest Death Metal bands of all time. Originators, innovators, trend-setters – they have inspired generations. But time waits for no man and it must be acknowledged with the arrival of ‘The Headless Ritual’ that they no longer sound fresh, inspired or dangerous.

The bottom line is that – no matter how hard they try – guys in their mid-40s won’t possess the energy, creativity and innocence they had in their early 20s. ‘Macabre Eternal’ defied the odds but this new one doesn’t.

While an Autopsy in decline is still way better than most other current bands in the subgenre (or any other) and there are certainly some enjoyable parts on this album, the reality is that it’s only vaguely interesting. After a couple of listens, I can take it or leave it. And I’m leaning towards the latter.