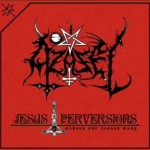 Having enjoyed Azazel’s contribution to the split with Goatmoon, I was always going to check out their debut album – which appears almost 20 years after the formation of the band. Nothing is done conventionally in Finland, it would appear. And why should it be? Anyway, the album is a success.

Azazel’s Black Metal is very much of the blasphemous variety (‘Rotting Nazarene’, ‘Raping The Virgin Mary’, ‘Satan’s Little Cunts’, anybody?) and the image on the inside of the inlay leaves nothing to the imagination. This album could easily have been recorded in the early ‘90s. It has a decrepit, analogue sound and reminds me of a time when the glorious stench of burning pews filled the air of Northern Europe.

If you enjoyed raw, dirty, rough and ready BM back in those seminal days, then chances are you will also like Azazel. ‘Jesus Perversions’ would almost make you believe that the last two decades were just a dream.