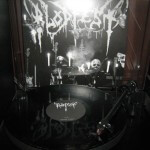 The fifth full-length from these balaclava-clad Danes emerged on cassette last year courtesy of Phlegm Productions  and is now available on vinyl thanks to Ancient Darkness Productions. Including the bonus track – a Nuclear Death cover – we get eleven songs in total with a running time of around 40 minutes.

Blodfest unapologetically blast out harsh, thrashing, uncompromising Black Metal with all the subtlety of a boot in the testicles or a hammer to the jaw. It’s full-speed-ahead, chaotic, swirling, pummelling fare – dark, dirty, ugly and caked in bestial excrement. ‘Ild Vist Ulmer’ is a nasty aural assault for diehards only. It’s difficult to digest and remorselessly pounds your poor eardrums into submission. On that level, it achieves what it sets out to achieve…

On one hand, I’m somewhat indifferent to owning this. It’s not doing a great deal for me in terms of entertainment and I can’t imagine on too many occasions in the future thinking ‘oh, I must give that fucked-up Blodfest album another spin’. But, having said that, you have to admire the honest endeavour and naked balls-to-the-wall integrity of Black Metal performed with such uncontrolled contempt, brash fearlessness and utter gratification.