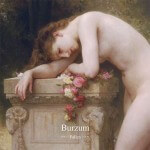 What the fuck is this? How can the legendary Burzum deliver such a steaming pile of crap? This album is unbelievably bad.  Not that it matters, apparently, because Varg Vikernes has evolved into such a hype vehicle these days that he could probably get away with releasing just about anything. Wait, that’s precisely what’s happening here…

I am stunned by how terrible ‘Fallen’ is. Owning and loving all the previous Burzum records (apart from the two dumb instrumental releases), I was extremely excited to hear that there would be an eighth full-length landing just a year after the victorious post-prison return that was ‘Belus’. The reaction to ‘Fallen‘ had been favourable too, with rave (p)reviews popping up all over cyberspace, so I assumed that it was a surefire must-buy. It isn’t … it misses by so much it doesn’t even hit the corner flag.

Two minutes into second track (and first song proper), ‘Jeg Faller’, the arse completely fell out of this one. The genesis of gay, folkish, clean vocals and ridiculous music that sounds like it’s culled from a nursery rhyme or fairytale almost knocked me off my feet (I was sweeping the kitchen floor at the time). Suddenly, I had images of Robin Hood and his merry men running around in tight, green lycra pants, touching each others’ buttocks. TOO MUCH FOLK. Dreadful stuff.

From there on, I just couldn’t take this album seriously. It picks up a bit towards the end – ‘Vanvidd’ is okay; ‘Enhver Til Sitt’ is actually quite good and could take its place an any previous Varg release; the first part of ‘Budstikken’ is more than bearable (before it deviates into Middle Earth melodrama); and the beautiful, creepy, atmospheric, tribal closer ‘Til Hel Og Tilbake Igjen’ is utterly magnificent in its esoteric easternness– but it pains me to say that, as a whole, ‘Fallen’ is possibly the most-aptly-titled album in Black Metal history.

I’m not sure this is even BM. It’ll probably sell like hot cakes but, personally, I’d prefer if The Count was still behind bars.