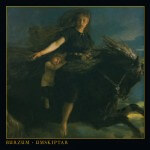 I’d be the first to admit that ‘Fallen’ provoked a pretty hysterical reaction from me. It was an album of real extremes – some superb parts and some terrible passages – and those lows totally destroyed it. By comparison, ‘Umskiptar’ is neither here nor there, content just to plod along in no man’s land and ultimately going nowhere in particular. Sort of coma-inducing.

This time around, the music is so tame that it’s hard to even get angry. Burzum these days is so passive, so inoffensive, so sedentary and unadventurous that I struggle to see the point in Varg continuing to release new material. Of course, the masses will lap it up again (wait, I do see the point in him churning out his pompous tunes) and there’ll hardly be a word spoken or written about how far Burzum has fallen since those heady days of yore when there was true essence to his music – a flame, an intensity, a darkness.

On ‘Umskiptar’, the bearded one just goes lethargically through the motions. He’s reinventing himself as some sort of folk hero but the truth is that this music is boring and pointless. Slow- to mid-paced and lacking any edge or steel, it’s all oh-so-pleasant on the ear and at the same time as relevant to the Black Metal scene as Bon Iver is.

Distinguished past or no, this is simply not Black Metal any more. I’m not sure what it is, to be honest. Just mediocre meanderings; uninspired elevator / supermarket music that’ll be hailed as inspirational. If you played this to your grandmother, chances are she’d like it. That can’t be right, can it?