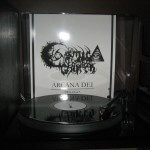 Collating all twelve offerings from Cosmic Church’s 2009 trilogy of ‘Arcana Dei’ EPs, this double album resides somewhere between collectible and curio. It’s a great way of catching up with the Arcana Dei series, which was originally available on cassette only courtesy of Cocainacopia, but at the same time ‘Arcana Dei I-III’ doesn’t really feel like a proper album. (Perfectly understandable, seeing as it isn’t!)

The vacant Side D bugs me more than it probably should, considering that in the case of this release it was wholly unavoidable. But the music on the other three sides of these two records is pretty fantastic – creepy, spacey, melodic, obscure, underground Black Metal. At close to 73 minutes in total, there’s plenty to get your rabid teeth into.

To lazily cut to the chase, let me conclude that, all in all, on this compilation, Cosmic Church serves up an interesting and unhealthy dose of Satanic blackness that is as intriguing and irregular as it is unessential. But essential things are boring, anyway; get this instead.