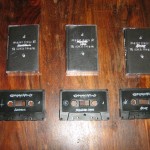 ‘The Jewel Throne’ was originally released a decade ago in between Dead Reptile Shrine’s second and third full-lengths. Ironically, it’s much longer than both of those combined! Comprising three generous albums’ worth of material (71 minutes; 79 minutes; and 68 minutes respectively), this collection contains a whopping 58 songs. Though songs is clearly the wrong word when describing DRS…

Antihumanism re-released the lost trilogy on three pro-tapes at the start of the current calendar year and I must say I’m delighted to have secured a copy. I think. While it’s difficult to tell the tapes apart by looking at them, I eventually learned how to differentiate between ‘The Gates Into The Underworld’, ‘Pohjantähden Lapset’ and ‘Helvetenskap’. (Take a bow Post-it®)

There are literally hours and hours of wondrous woodland fun to be had within the sanctuary of ‘The Jewel Throne’. The music veers between eccentricity and complete lunacy with gay abandon, kind of like Urfaust on acid. It’s exactly what you’d expect to hear from a horde of touched inmate let loose on a veritable orchestra of instruments in an asylum. Somewhere. This is improvised and spontaneous B-movie horror soundtrack stuff for the depraved only.

At times, I’m almost convinced that the tapes are retarded and that I’m retarded for listening to them. Which makes Dead Reptile Shrine’s relatively-unknown triple dose of dementia all the more compelling. Approach this one with caution and enter at your peril. And be grateful of the fact that there’s too much going on here to every fully get your head around.