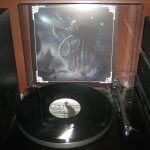 Having bought all twelve previous Drowning The Light full-lengths – as well as quite a few of the countless splits, EPs and demos – I have been deeply disappointed by the so-called music on offer on ‘From The Abyss’. The Aussies have gone for a more melodic, epic, effeminate and accessible sound this time around and the records reek of grandeur and pomposity.

This is far removed from the Drowning The Light I fell in love with and, in the let-down stakes – ranks right up there with recent less-raw, sell-out departures from Satanic Warmaster, Watain and Nefandus. And Burzum and Graveland. It’s doubtful that there are many of you sitting on the fence at this stage regarding whether or not to purchase this album, seeing as it was released six months ago – but, for what it’s worth, ‘From The Abyss’ is a real shocker that should be avoided at all costs.

Might be good for listening to whilst looking at butterflies dancing around outside in the garden, but otherwise this album is just pure irritating. And the warbling on the liner notes along the lines of ‘we are Black Metal and fuck the unconverted non-believers in the pathetic world’ is pretty embarrassing when the music is this lush, camp and easy-listening. Candy floss.