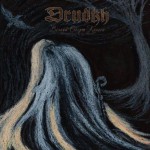 Hard to believe this is already Drudkh’s ninth full-length. While for some the law of diminishing returns seems to have kicked in regarding the Ukrainians, I personally have always found their releases to be rather excellent. And ‘Eternal Turn Of The Wheel’ ranks right up there alongside the finest efforts of their illustrious recording career.

The blurb / gossip / bullshit circulating before this album landed suggested that we were going to be treated to a back-to-basics album – something more along the lines of ‘Autumn Aurora’ than ‘Handful of Stars’. Whatever. I’m always dubious about such assertions because it isn’t possible for a band to eschew its evolution and natural progression. How can you roll back the clock to 2003 and de-volve?

To me, this is just Drudkh, pure and simple. Obviously, it sounds a lot like most of their other releases – but not exactly the same as any of them (hmmm…). Another solid (if somewhat short) full-length from a band that’s received an undue backlash recently. Drudkh remain as fresh and relevant as they’ve ever been and if you’re waiting for them to come up with something new and different then you are a fool.

If you’re already a fan, you’ll love this. If not, don’t listen to the snobs … this is as good a place to start as any. Great emotional, epic, frozen Black Metal with a distinctly Ukrainian feeling. Superb.