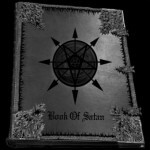 ‘Book Of Satan’ is interesting because it manages to be unconventional without straying too far from the boundaries of what Black Metal is. To my mind, it still deserves to be categorised as Black Metal even though is certainly doesn’t stick to the tried-and-trusted template. Credit is due to Hungarian musician Shadow for producing an album that’s refreshingly different but still maintains the dark and eerie presence so vital to BM.

Having previously purchased ‘The Darksoul’s Scream’ and ‘Pray For Death’, I was familiar with Dusk’s earlier work – fairly traditional Black Metal that stays true to the formula laid down by genre-leaders such as Darkthrone and Burzum. I thought both those releases were excellent and was intrigued upon acquiring this new one as I’d read that it was different … and it doesn’t disappoint.

More ambient and ritualistic than Shadow’s previous work, ‘Book Of Satan’ is wholly spiritualistic and Satanic, slower in pace, with a very lo-fi production and a dull-as-fuck sound. The guitars are hardly there at all, pushed way to the background, the vocals / chants, synth and (dull) percussion taking prominence. The sound is deliberately murky and my speakers go apeshit when I crank the volume up. Not for everyone but unusual sonically…

Song titles constantly reference Him and His and He, leaving us in no doubt what (or who) the subject matter is. I think the dark deity would thoroughly appreciate this album and I believe it is worthy of investigation for anyone who wants to try something a little different. Fans of Ride For Revenge, for example, should enjoy ‘Book Of Satan’. On the downside, the album is very short, but it’s a triumph for quality over quantity. And  a triumph too for the rare dark arts of the Black Metal underground.