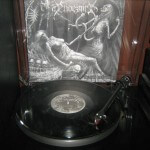 I believe this was the last album that the late Trondr Nefas (Urgehal, Beastcraft, Angst Skvadron) performed on. If so, it’s a historic release. The Norwegian band Endezzma delivers fairly atypical Black Metal with an almost cosmic feel intruding at times. There are occasions along the way when I’m almost reminded of Sigh except ‘Erotik Nekrosis’ is much more old school and, well, authentic.

There’s a strong sense of melody running through the seven songs (plus intro), with prominent lead guitars very much to the forefront. Drums are unobtrusive but adequate; the bass sometimes fleetingly reveals itself; vocals / rasps are solid and unspectacular. In fact, that’s a pretty good description of the album as a whole: solid but unspectacular.

There are some cool and unusual moments on  ‘Erotik Nekrosis’ and the musicianship is certainly impressive. The record is professionally finished with inlay including lyrics etc. and the mid-paced Black Metal on offer is far from run-of-the-mill, thanks largely to the sprinkling here and there of keyboards. At times it soars close to greatness. But this isn’t a brilliant album by any stretch of the imagination.