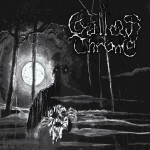 Interesting debut here from an unknown entity out of Texas / Arizona in the States. (Wonder how that works.) I have little other info about Gallows Throne except that ‘Scourge Of Bedlam’ comprises six songs and lasts a mere 29 minutes. Short album but it’s a decent effort, in fairness. I’ve heard much, much worse.

GT go for a sort of ambient / atmospheric Black Metal with some post- leanings and fierce howls and very impressive musicianship. It’s a very catchy sound they’re cultivating, but the album certainly strays more into the melodic bracket than my preferred raw realm. Put it this way: ‘Scourge Of Bedlam’ isn’t one you’ll throw into the stereo if you want to vent some rage at the world…

The closing strains of Track #2, ‘Celebration Of Endings’, for example, are über-melodic. Same with the fourth one, ‘Tendrils Wrought’. I can’t find any fault with this except that it’s short and not exactly my own personal preferred chalice of poison. But if you want to bite your teeth into some accessible, atmospheric BM with accomplished performances and a fairly funky, user-friendly vibe, then ‘Scourge Of Bedlam’ shouldn’t disappoint. My palate longs for something else, though.