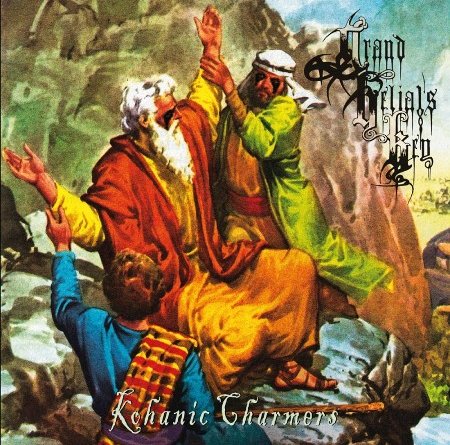 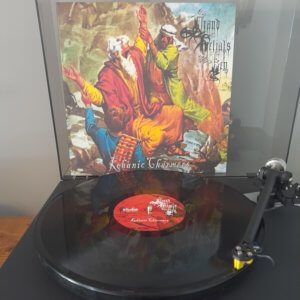 Typically brilliantly monikered, ‘Prayer Shawl of the First Born Donkey’ provides a suitably supreme opening to the first Grand Belial’s Key full-length in 17 years, five long-awaited minutes of uninhibited, inebriated Black Metal mockery which prove instantly that the more things change the more they stay the same. Deservedly regarded as one of Black Metal’s most iconic forces, Grand Belial’s Key deliver the sacrilegious goods in abundance on ‘Kohanic Charmers’ – a belated addition to the blaspheming discography but one which fits in seamlessly with what preceded it. And that’s saying something!

The fact that Grand Belial’s Key are considered in any way contentious or controversial says more about the fucked-up and precious nature of the world and society we live in today than the band itself. This is authentic, legitimate fare from seminal musicians who unapologetically refuse to compromise on their art or their message. From the instantly-recognisable artwork to the song titles and playfully scornful music itself, everything is reassuringly in its rightful place.

The so-called scene has become so safe, woke, boring and mundane in recent years that it’s almost miraculous to have GBK back doing what they do best. The instrumental interlude towards the end of ‘Crud Drips from the Shofar’ reminds me of why I fell in love with Black Metal in the first place, while the horn / (shofar?), rolling drums and pitiful, slavering entreaty at the end of said third offering, before the frantic ‘The Door Is Marked with Sheep’s Blood’ scornfully closes out Side A, represents a work of pure genius.

Grand Belial’s Key’s first recorded material since their contribution to the three-way ‘Weltenfeind’ split with Absurd and Sigrblot – which was recorded in 2006 – is also their first release proper without either  The Black Lourde of Crucifixion or Grimnir Wotansvolk on vocals. On ‘Kohanic Charmers’, Unhold (Sven Zimper) proves to be a more than adequate successor, channelling what I must admit is a surprisingly-wondrous vocal performance. At times he sounds like a totally possessed and unhinged madman, for example on the bloodcurdling back-to-back curses ‘Fiscus Judaicus’ and ‘Two Forks and a Muttering Diviner’.

As expected, the music is top notch, also, of course, majestic in its utter mockery and offensively charming at times (There’s more variation and nuance in the pummelling, soaring, deviating ‘Fiscus Judaicus’ than many BM bands will manage across a full album). A case in point being the spellbinding, enchanting, medieval instrumental ‘Adrift in the Viscera of She’ol’. From start to finish (and what a rousing, rabbling finale the not-uncrude ‘Turbans Nailed to Their Heads’ provides!), this is an absolute belter – almost ban-worthy in its sheer, orgiastic brilliance – and it puts most other Black Metal bands of today to eternal shame.