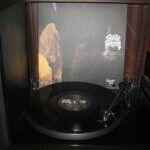 Brits Grave Miasma are part of the new wave of Death Metal that is allegedly breathing new life into a jaded genre. Debut album ‘Odori Sepulcrorum’ is receiving rave reviews everywhere one looks and the band is being liberally mentioned in the same breath as the likes of Portal, (label mates) Necros Christos, Mitochondrion and Vasaeleth. (Other great modern, occult Death Metal bands that I’d like to chuck into the conversation are Antediluvian and Ævangelist.)

Personally, I’m finding ‘Odori Sepulcrorum’ to be hard work. I was 100% convinced that I’d love the album but for some reason it just isn’t sucking me in the way I expected it to. Don’t get me wrong, it’s certainly intriguing and out there; murky, dense and ambitious (but with most of the magic seemingly hidden beneath muddy waves of impenetrable tedium).

The packaging is superb – vast triple gatefold sleeve with a fine A5 booklet included – and the outlandish hype surrounding Grave Miasma is almost as impressive. Perhaps it is as a direct result of my expectations having been too high, but, no matter how many times I listen to this record-and-a-half (yes, you’ve guessed … no music on Side D), I just can’t get excited by it. I’m not sure whether I should be disappointed with myself or with the band. Either way, this album bores me (and I dislike the sound, too).