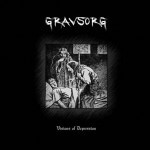 This is a really dull album. I mean that in a good way. Danes Gravsorg play an excruciatingly dreary form of depressive Black Metal that has the same effect on the senses as the darkest funeral doom. The mood is sombre and negative, from the cold, oppressive opening strains of the ‘Intro’ right through to the closing melancholic meanderings of ‘Preferred Exit Part II’. I genuinely felt like killing myself for the entire 36 minutes and, to be honest, I’m not sure if that’s a good thing or not.

For those who love music full of nothing but negative feeling, ‘Visions Of Depression’ is a masterpiece. But for older, more mature folk like myself, who are getting closer to the cold grave and starting to shit themselves and think that maybe we have something to live for after all, it could be too much. It could push you over the edge, upset your happy equilibrium and send you reaching for the nearest razor blade / box of pills / elevator / rope / machete / car keys / or whatever.

Bleak, crestfallen and without any hope of salvation, these guys have created an album so suffocatingly depressive that it should come with a health warning or a shotgun. Yet, there is something beautiful and blissful about the whole thing. Even though I won’t listen to this a great deal in the future – and I certainly won’t subject my children to it – I’d still rate ‘Visions Of Depression’ as a bit of an unheralded classic.

Released back in 2009, this slow-paced, chilling exercise in morbid misery (like a darker but less enticing Hypothermia) is the fuzzy antidote to the naivety and dumb happiness of the FaceBook / iPhone / reality TV generation and should accumulate a significant bodycount by the time it disappears off the face of the planet. It is dull at times (deliberately) and the album just seems to dwindle away at the end, petering out without warning, but I’m sure that’s all in keeping with the artists’ disposition.