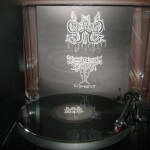 Another collaborative effort from two labels that have really stolen my attention in recent months, ‘Demo 08’ manages to exceed expectations. I didn’t know before purchasing this record that there were no vocals on it (at least, if there are any, I can’t hear them!) and – if truth be told – that knowledge would probably have resulted in me giving it a miss. I mean, who wants arty-farty instrumentals?

However, my ignorance has been rewarded as Grifteskymfning – a band whose name I will never be able to spell – delivers a superb collection of five subtle, warped, repetitive tunes on this album (it’s underground music we are dealing with so don’t let the word Demo put you off).

In many respects, the music is reminiscent of Blut Aus Nord, except more low key and understated, perhaps a little rougher around the edges (with a measure of Hypothermia and Urfaust and fucking Hawkwind thrown into the mix. Maybe). It’s hard to say whether the inclusion of trademark shrill Black Metal vocals fluctuating in the background would have enhanced the songs – my gut instinct says they would – but as it is, ‘Demo 08’ is a great, trippy slab of instrumental dark art that’s well worth checking out.

Move quickly, though – for some reason these labels restrict their releases to frustratingly small limitations (a mere 250 units of this one, I believe, and already sold out at source, but still available in some distros).