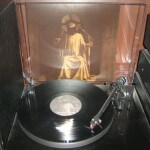 This is another solid full-length from the French horde and I believe the vinyl format does it great justice. An already-enjoyable album is complemented by lovely artwork and packaging, with a different cover to the CD edition and a nice inner sleeve including the lyrics. It’s a cool record to look at anyway and I suppose that’s half the battle, eh?

As for the actual music, Hell Militia has incorporated some movie (I think…) samples etc. into their sound this time around and the whole thing seems somewhat more experimental than I remember the superb ‘Canonisation Of The Foul Spirit’ and equally-worthy ‘Last Station On The Road To Death’ being. By and large, the experimentation pays off – I especially enjoy the gargled vocals on ‘Death Worship’ (which resurface on other parts of the LP).

Hell Militia are more melodic than their sinister handle might suggest and the production on this album is really clear and crisp, resulting in a Black Metal record that’s certainly more polished than raw. In some regards, ‘Jacob’s Ladder’ is more David Lynch soundtrack than bullet belts and arm spikes but – even though I normally prefer my BM to stay close to the original template – I still like it. (And, fear not, there’s still a lot of Black Metal on here as well as a bit more of the kitchen sink than I am accustomed to with this band.)