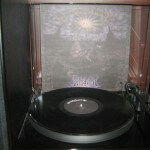 It’s over two years since this masterpiece was released on vinyl but ‘Exaltation Of Wisdom’ is still available if you know where to look and is an album that every Black Metal fan should probably have in his / her collection. Simply put, herein you will find an intriguing ritual that constitutes some of the most incredible underground music crafted in the last decade or so.

I initially purchased the stunning digi CD version due to the high cost of shipping the record from Sweden; then I belatedly opted to add the vinyl edition to my collection when I spotted it in the Ahdistuksen Aihio Productions webstore for just €19 plus postage (which worked out at €6 per record if I purchased two). Thus, the glory was mine for just €25 including P&P.

Sweden-based Chileans Hetroertzen emit a fantastic strain of Luciferian Black Metal … esoteric, gnostic, magical. This is occult BM of the highest possible variety and the inclusion of a really cool 28-page book(let) called ‘Book of the Dragon’s Art’ – which contains all lyrics as well as directions on locating the key that unlocks the tree of life – adds to the mystique of the music.

Obviously, I’m nit convinced any spiritual enlightenment can be had but the accompanying literature serves to contextualise the album and lends it an otherworldly, supernatural dimension, which always works well with underground music. The included extras make ‘Exaltation Of Wisdom‘ more dramatic, more lofty, more theatrical. Plus, the music is fucking tremendous and that’s all that matters really.