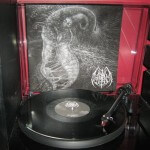 ‘Divinity Through Un-creation’ is the debut full-length from challenging and crushing Australian horde Ill Omen and it’s a foul, dank gust of fetid vapour. This is oppressive, dark, deathly Black Metal that suffocates relentlessly, wrapping its deviant fingers around your throat, squeezing the very air from your windpipe, leaving you weak and disorientated. In other words, it is absolutely fantastic.

The dense atmosphere prevalent across the entire duration of this record makes it difficult going at times but it is worth the effort and, after a dozen or so listens, the full delights of the album should have revealed themselves to you. Not that it’s a ‘grower’ necessarily, the excellence of these tunes should be apparent to you instantly. Upon first listen, you will realise that Ill Omen is a little bit special.

Words like ‘occult’ and ‘esoteric’ have been over-used to such an extent to describe middle-of-the-road Black Metal that it almost feels like I’m doing Ill Omen a disservice to bring them up here but, honestly, if this isn’t prime occult esoterica in a black shell then I don’t know what is. By the time you get to the end of Side A, which closes on an immense high with ‘The Great Keys Inherit’, you will be converted / hooked / gagging for more.

Flip the record over and there are three more songs proper to be enjoyed (including the brilliantly-named and awe-inspiring mid-paced dirge “I, Sate Atop The Throne, Of A Thousand Burning Stars...”) plus the obligatory ambient outro, bringing the whole experience to a mind-melting 40-odd minutes. As ever, the vinyl format does remarkable justice to an already-magnificent collection of tunes. On record, this stunning, evil, nasty album looks and feels as good as it sounds.

The weird antipodeans have only conjured some of the most intriguing, disciplined chaos you’re going to hear – ever.