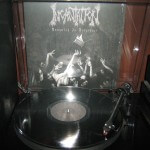 Astonishingly, it has been 21 years since Incantation inflicted their debut album, ‘Onward To Golgotha’, upon the unsuspecting masses. With so much blood and guts having passed under the proverbial bridge, one would perhaps now expect John McEntee and his not-so-merry men to be a spent force; a tired, burnt-out parody of their former, glorious selves.

To the contrary, however, the years have been kind to Incantation and they appear to have blossomed with the passing of time … certainly if ninth full-length ‘Vanquish In Vengeance’ is to be used as a barometer.

This is absolutely magnificent, compelling Death Metal majesty from start to finish, a stellar record with perhaps the most thrilling denouement in extreme music history in the shape of the utterly beguiling eleven-minute epic ‘Legion Of Dis’.

A lot of newer (I suppose most bands in the world are younger than Incantation!) Death Metal bands are – quite rightly – attracting unprecedented levels of hype these days. There is some amazing DM surfacing and also a lot of superb welding of Death and Black taking place globally. But very few of these newcomers can hold a candle to the original innovators. Incantation prove on this record that they truly are an irresistible force of nature.

The vinyl is 180g, looks sumptuous and contains an inlay with lyrics. This is a classic release that nobody should overlook and I make no apologies for featuring Incantation on what is ostensibly a Black Metal blog. My mission is to let you know about great music – Death and Black – and I would assume that most readers will appreciate both subgenres, which are pretty much joined at the hip anyhow.