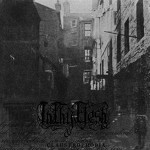 Two minutes into exquisite opener ‘Da Nossa Carne’, I suspected that ‘Claustrophobia’ – the third full-length from Portuguese duo InThyFlesh – was going to be very special indeed. Some 54 minutes later, my hunch was confirmed to be correct: this is a spectacular slab of supreme Black Metal that succeeds on so many levels that I barely know where to start.

While the previous album ‘Lechery Maledictions And Grieving Adjures To The Concerns Of Flesh’ was decent, I was not prepared for the perfection of this release. The strength of ‘Claustrophobia’ lies in the simplest of factors; InThyFlesh have essentially done all the basic things right and the result is mind-blowingly brilliant.

All the instruments are (de)tuned to perfection, the performances are commendable; the compositions ideal; the production clear and crisp. This all results in nine stunning BM anthems imbued with emotion, pathos and more feeling than a colony of torture chambers. The second track ‘Abismo Interior’ soars through the speakers with intent, a sumptuous pure Black Metal masterpiece, with plaintiff guitars and desperate vocals, the screeches picking at the flesh, the music itself tattooing itself upon the exposed subconscious.

‘Devaneios De Rejeição’ is even better, an evocation of ancient hurt escorting us on a transcendental journey to the darkest of places / times. Harrowing and majestic, this is Black Metal the way it was imagined by the scene’s forefathers, delivered with a style, panache and verve that would put modern-day Darkthrone to shame. Though the content is overwhelmingly negative, the album succeeds in making a wholly positive impression. It’s that good.

I’ve listened to ‘Claustrophobia’ ten or twelve times already and it doesn’t lose any of its appeal with repeated listening. The ten-minute ‘Hasteado Ao Infortúnio’ remains compulsory, addictive and essential, meandering with tempo and mood changes, fluctuating through realms of hate and disgust, tormented vocals to the fore, ripping at the soul, the traditional BM music tempered by ambient parts acting as a perfect companion. This is the most ambitious song on the album and it works magnificently.

Other songs worth a particular mention are the epic, anthemic lament ‘Perdição No Vício d’Austeridade’ – definitely the strongest track on the album – and the stunningly sorrowful ‘Alvoroço De Antecipação’, both of which would be worthy of their place of any landmark Black Metal album. All in all, ‘Claustrophobia’ delivers some of the most incredible, raw, emotional BM you’re going to hear this – or any other – year. Utterly mandatory.