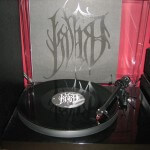 So Isvind finally decided to get off their arses and record a second full-length. A whopping fifteen years after “Dark Waters Stir”, “Intet Lever” surfaced in 2011 on CD and vinyl format. For obvious reasons, I opted for the latter. Considering that this was aimed at an exclusive market and therefore quite expensive to purchase, I was naturally disappointed that the label didn’t put a bit more effort into making it more attractive. Aesthetically, it’s fairly bland.

Musically, Isvind blasts out very typical mid-90s-style Black Metal. They do it well, but don’t stick out as exceptional in any manner, shape or form. I find this album quite boring, to be honest. For some reason that I can’t put my finger on, it just bounds along relentlessly without ever really going anywhere. While “Intet Lever” isn’t a bad album by any reckoning, it certainly isn’t a stand-out one either.

Often I’d be the first person to commend a band for sticking to the tried-and-trusted formula and for delivering some good old-fashioned true BM. But in Isvind’s case, I’m not convinced. Personally, I find the album to be lacking inspiration and, as such, it’s something of a non-event, unfortunately.

A harsh review, perhaps, but I am 100% on the side of the consumer and there’s nothing here to justify the unreasonably-large investment required to own a copy of this. In the end, it’s probably just as well this is limited! I expected more.