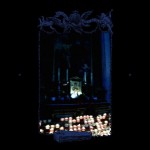 It’s amazing – five years after the event – how many commentators are claiming to have been blown away by Negative Plane’s 2006 debut, ‘Et In Saecula Saeculorum’. I don’t remember there being much of a fanfare around it at the time and I’d love to see the sales figures. It was an undoubtedly spectacular release – one of the finest Black Metal debuts of all time – but was it really that popular? I doubt it. Seems to me there are a lot of people jumping on the NP bandwagon.

The Americans are being championed as the saviours of BM and rarely have I witnessed such a torrential outburst of gushing praise as that which has greeted the arrival of their second full-length, ‘Stained Glass Revelations’. If the superlatives and hyperbole are to be believed, this is a more-than-mandatory release; one that reshapes and redefines what Black Metal is and what Black Metal can be. Considering that I loved ‘EISS’ and unable to avoid the hysteria that accompanied this latest release, it was difficult not to be predisposed towards giving a glowing appraisal.

Put it this way: I really, really wanted ‘Stained Glass Revelations’ to deliver everything being promised. On the first few spins, I thought it was a pretty good / great CD but then, the more I listened, doubts started to emerge. Is it really that good? We are served a generous helping (over an hour’s worth) of modern, technical Black Metal. If you can imagine a BM version of Pestilence or Atheist, you won’t be too far away from what we have here. Blackened technical DM, maybe. It’s good but, let’s be honest, it’s not great.

For me, this is a classic case of the world wanting a saviour too much. You know when the villagers see a sign in the barley that the Messiah is on his way and they gather on the footbridge to welcome him and then an ordinary bloke comes walking around the corner? And he’s heralded as a hero? But he was just in the right place at the right time…

The production on this is absolutely perfect and, for the most part, the music is good. But it’s not as brilliant as I expected and I can’t get too excited by an album that at times sounds like a cross between Sadus, Muse and The Beach Boys. Is it even Black Metal? I’m not so sure. In fact, I don’t think it is. Sorry, but ‘SGR’ doesn’t live up to the hype.

While I laud the leftfield leanings and applaud the fact that Negative Plane are bold enough to bring something fresh to a stale table, ‘Stained Glass Revelations’ isn’t as invigorating as it is ground-breaking. In fact, it’s a regression from its predecessor, straying so far from the template at times that it becomes very, very questionable. Certainly not an album for people who only like Black Metal. Pity.