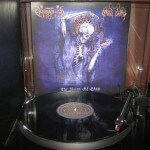 I bought this split LP mainly for the Nightbringer side, as I’m not especially a huge fan of Acherontas (despite the rave reviews appearing elsewhere). However, I am pleased to report that the two offerings vomited forth by the Greek combo in this instance are devilishly impressive. Throw in the by-now-guaranteed solid contribution from Nightbringer and ‘The Ruins Of Edom’ is a definite winner.

Previous exposure to Acherontas led me to believe they were overly melodic and almost pompous in a puke-y Summoning sort of way, but I detect little of this on the ambitious eight-minute harsh Black Metal work-out ‘Layil’. The ensuing ‘Reverence For The Scarlet Goddess’ is atmospheric and keyboard-driven, something akin to what I had believed Acherontas was all about before entry, but in fairness it’s more an ambient masterpiece than an exercise in pomposity. Perhaps I will have to revise my opinion of this particular band…

Nightbringer delivers two typically-convoluted tracks of intelligent, wordy, philosophical Black Metal, bookended by a couple of clever instrumentals / ambient passages, proving once more that they are one of the United States’ premier proponents of the occult. Truly brilliant stuff that gets better with each listen. I would recommend purchasing this record for the Nightbringer presentations alone (as I did), but the Acherontas tunes arrived as a pleasant surprise.

Even though the whole thing signs off in little over 30 minutes, ‘The Ruins Of Edom’ is probably as fine a split release as you’re likely to acquire these days, imbued with a menacing atmosphere and cased within a lovely cover with lyrics and additional artwork printed on the inner sleeve. A lovely record, all told.