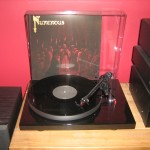 Signed to Northern Heritage, the true home of underground Finnish Black Metal, Numinous is one of those mysterious, faceless, nameless (personnel-wise) entities that make this subgenre a joy to behold. The members remain anonymous and it’s hardly a publicity stunt as only an idiot could accuse such an unknown band of seeking attention. All of this adds greatly to the mystique and aura of occultism surrounding Numinous … and the music ain’t half bad either!

Words I would use to describe Numinous are dark, evil, obscure, swirling, dissonant, menacing, nasty, evil, suffocating – I’m sure you get the picture. Even though it’s a fairly short album, ‘Numinous’ is nonetheless wholesome and fulfilling, packed with black pleasure and seeming to last way longer than it’s officially-listed 31 minutes.

This probably falls somewhere into the orthodox BM category, coming across like a more underground version of Deathspell Omega, although better in lots of ways. It’s hard to beat something that’s genuinely obscure and the fact that it’s available on record adds to the appeal greatly (Having said that, if you don’t have a vinyl player, I would still recommend buying this on CD).

I tried reading the lyrics while listening but couldn’t quite follow. It’s one of those. Reminds me of when I first started to listen to Death Metal and Black Metal, when extreme music was genuinely oblique and inaccessible. All these years later, there’s still no greater thrill than discovering an underground gem, one that is all substance and no hype. Great stuff in every way, this one.