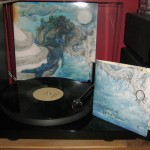 Here’s a record that’s thoroughly-deserving of your attention. One of the first things to strike me about Rahu’s debut full-length, ‘The Quest For The Vajra Of Shadows’ is that, aesthetically, it is an atypical Black Metal release. No clichéd black-and-white colours here; we have a sea-blue-ish cover with some beautiful oceanic artwork contained within a framework of essentially bright, vibrant colouring. Nice packaging and inlay, too.

So we know it’s not raw Black Metal. At least not in the conventional sense…

Instead, we get rather ambient, atmospheric fare that somehow manages to maintain a grim overcoat. The songs are mystical and charismatic, wet and murky, awash with emotion, harking back to the glory days of Scandinavian BM but also introducing an added 5% of their own to render the whole thing slightly unique and unusual. Enough to silence the critics who are always so quick to say of Black Metal: “I’ve heard it all before”. Now they will have to change their tune to “I’ve heard 95% of that before”.

Equal parts an antidote to depressive Black Metal and a natural successor to, let’s say, Odium, ‘The Quest For The Vajra Of Shadows’ is an album that you need to experience to fully appreciate. It is, therefore, almost futile for me to be rabbiting on about it. Mostly mid-paced and catchy as hell, it veers towards the melodic side of the spectrum a little more than I’d ideally like, but that’s just a small quibble about an otherwise intriguing record produced by these veterans of the Finnish underground.