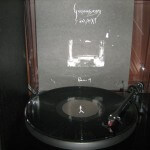 As you will gather from the warbling to follow, I have mixed emotions about this one, which seems to be both brilliant and rubbish at the same time. Is it possible for a record to be too cult? I appreciate a lot of what Ancient Records is doing but this one isn’t particularly hitting the spot for me.

Might have been better to leave ‘Demo 09’ alone as a cassette-only release. Records are bloody expensive things to buy and this one – intriguing and all as it is – doesn’t quite justify the expenditure.

I should probably qualify my review by pointing out that the music of Reverorum Ib Malacht on here is not Black Metal in any way, shape or form. Rather, some sort of creepy, chamber darkness with spoken chants and a horrible production resulting in a muddy sound that’s extremely frustrating. I have to turn the volume dial way UP on my stereo to hear this but still an overwhelming dullness permeates.

Having said that, I’m not one for crystal clear productions either so I do appreciate what’s going on here … to an extent … just feel that perhaps it goes a bit too far. It’s so dull that at times I feel like I’m listening to the record underwater – or with a dose of flu gripping my very essence – and it’s hard not to feel weary and dreary under these circumstances.

Also – call me petty! – there’s no track-listing included, which is somehow annoying and confusing as it appears to differ at least slightly from the running order of the original version. Is this not a basic requirement? ‘How different is it from the original?’ I wonder. ‘Where is the 29-minute song?’ ‘Was there ever one?’ I have no idea. All part of the mystery. And therein lies part of the charm of Reverorum Ib Malacht – mysterious, eerie, transcendental, non-conformist and utterly obscure.

Despite all my reservations and undoubted pettiness, I find it difficult not to admire the band and (almost) love the record. I realise this is just a demo and I understand and accept that it would have been ludicrous to alter the sound quality in any way. Preserved on vinyl, we have the exact sound reproduced in its original glory. Commendable. I applaud the integrity. (And I really hope that doesn’t sound condescending.)

I can see this record possibly growing on me as time goes by. For the time being, however, the duller-than-dishwater, way-too-analogue-for-its-own-good sound leaves me feeling indifferent.