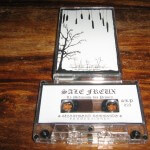 Clocking in at 44 minutes approximately and taking up one side of a pro-tape, ‘La Mélancolie des Pennes’ is the monumental sophomore album from French sensation Sale Freux, one of the Black Metal underground’s best-kept secrets. If ever there was a valid reason to start buying cassettes again, then this has to be it. The prime expressive outlet of a sole entity known to his friends as Dunkel, Sale Freux is a vibrant concern that has yet to put a foot wrong during the course of its stellar, fledgling career.

If debut album ‘Subterraneus’ came as a breath of fresh air, then this follow-up rubberstamps SF’s status as genuine contenders to a murky throne of chaos. Deploying a rich and varied approach to traditional BM, with the use of an ambitious array of instruments, ‘La Mélancolie des Pennes’ is top notch from the opening strains of quaint instrumental ‘Èclat d’Ailes’ right through to the closing volleys of ‘L’Envol Grave’.

Everything in between is equally exceptional. The six songs proper are lengthy and involving, averaging seven minutes’ duration and including frequent excursions and mood changes. Complementing the music, the packaging is great: nice minimal artwork that suits perfectly and the inlay includes all lyrics – a nice bonus considering the measly price of admission. My grasp of the French tongue is far from adequate but I think it would be safe to say that the subject matter is dark, sick, deviant and corrupt. The parts I can grasp are disturbingly insane.

The guitars are fuzzy, lo-fi and relatively melodic (acoustic at times, which would normally cause me to suffer a stroke, but Sale Freux pulls it off with style), most of the rawness emanating from the shrill shrieks that pierce the night sky, ripping the listener’s soul like some harbinger of death, a rapier to the eardrums, a knife through the speakers, dripping of despondency and despair. This is depressive Black Metal that will dispel all your preconceptions of what depressive Black Metal is … because it doesn’t sound like a typical band that might fit in such a category.

The production does leave a lot to be desired at times, but that authentic, underground cassette sound / feel is part of the overall charm and, if anything, adds to the already considerable appeal… Minor quibbles are that the album is shorter than the debut and I would also prefer if the music was divided evenly over two sides rather than just one; otherwise, the whole package is superb.

Musically, it’s less forced or contrived, more organic, honest and genuine than most of the music being churned out in the current climate, where bands are content just to copy one another and go through the motions. Of course, that’s not to say that Sale Freux doesn’t sound similar in many ways to a thousand other BM bands – it is Black Metal after all and stays safely within confines that need to be applied more rigorously – but there’s a subtle, unique twist applied in the most natural of ways by Dunkel and somehow he manages to sound a million times better than nearly all his peers.

No mean feat, that. Quite a prestige, in fact.