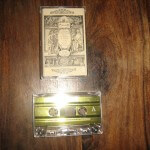 Sapientia from Sweden is a brand-new band that specialises in a hybrid of Death Metal and Black Metal that to my ears is more death (or even doom at times) than black. For example, vocal delivery reminds me more of Evoken or Glen Benton moonlighting in Vital Remains than it does of any BM band that springs to mind. Maybe they are Black Metal in spirit?

According to their Encyclopaedia Metallum page, Sapientia’s lyrics deal with Luciferian Gnosis and The Black Lodge, which is fine with me seeing as I don’t actually know what either of those two things are. Nor do I care. Suffice to say, we have on this tape five tracks of really cool underground black-infused Death Metal that’s at times in a similar vein to Necros Christos but as a whole different to any other artist I can think of off the top of my lazy head right now.

It’s a pro-tape, with proper printing on the cassette, professional insert and all lyrics included. ‘Through The First Sphere Of Saturnus’ is by no means the most essential album I’ve ever heard but it’s far from the worst and is well worth purchasing at this cheap price. Especially check out the stunning, epic closing song ‘Ad Infinitum’. Hurry, though – limited to 100 units.

(Apologies for the fucked-up-by-the-flash photo.)