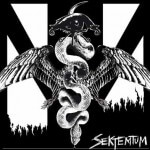 Sektemtum is the new band of Meyhna’ch, who you may know from his work with Gestapo 666, the magnificent Hell Militia and – most notably – the now-defunct Mütiilation. A real dignitary of the French Black Metal scene, for sure, joined on this recording by three shadowy figures called Six, James Prick and PLCD. Debut album ‘Aut Caesar, Aut Nihil’ is obviously going to attract plenty of attention from those interested in the main man’s considerable library of work and I think it’s fair to say it won’t disappoint too many of you.

Ten tracks dispersed over 47-odd minutes, kicking off with the title track and pummelling (apart from serene instrumental ‘218’) the listener into submission with huge riffs and some ghastly, guttural Death Metal-like vocals, proving once more that the difference between BM and DM isn’t always as apparent or pronounced as one might believe. Of course, Sektemtum is a Black Metal band – and I’m not trying to insinuate otherwise – but I think fans of Death Metal (or even grindcore) will also find plenty here to enjoy.

The mood that comes across me when listening to this is of an axe sinking into a skull, or sailors lost at sea, surrendering to choppy waters, overcome by the elements but dragged by some spectral figure into another realm just before gasping their final breath. Just general unpleasantness, I suppose… In a way, there’s nothing spectacular or ground-breaking going on; yet at the same time the songs are strangely addictive and do appear to possess that special something that elevates music above the (boring, inadequate) norm.

Not a classic by any means, but still a fairly potent brew heading your way. If you want to try a BM version of Converge or Cephalic Carnage, look no further. And the sick vocals are nothing short of extraordinary.