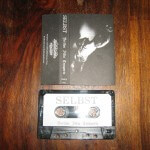 I know nothing about Venezuela. Geography was never a strong point of mine. If I was to attempt to generate a list of the nation’s virtues, I would go for things like sunny weather, sultry women, coffee or cocoa or drugs, sultry women, sunny weather, beaches, big breasts, bigger asses, stuff like that. Not Black Metal, anyway. But what do I know? (Nothing, clearly.)

One-man operator Selbst has surprised me with this cassette, which is limited to a mere 200 copies and delivers two lengthy tracks of pretty solid and impressive Black Metal of the sorrowful, anguished variety. This certainly isn’t depressive as such; the lyrics deal mainly with the “charade” of Christianity) and ‘Veritas Filia Temporis’ is described by its creator as Anti Dogmatic Black Metal. Cool.

For a demo cassette, the sound is decent, the production acceptable, and the music well above average. Good Black Metal doesn’t have to reinvent the wheel and this definitely doesn’t. Sometimes / often, the simplest ideas are the best. The further bands stray from the original template / ideas of BM, the more mundane / pointless they tend to become. So, kudos to Selbst for producing an unspectacular but charming and thoroughly enjoyable tape!