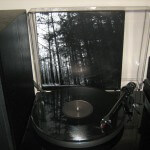 If you’ve seen this or this, then you’ll know I’m an admirer of Sentimen Beltza. I try to get my hands on as much material as possible from this Basque one-man affair but sometimes being a completist has its drawbacks in the value-for-money department. In short, this is hardly worth owning.

While the music of Oindurth SaVinitta is as mesmerising as ever, the problem with “Erio / Hegan Egiten” is that there’s simply not enough of it. Two songs, as the title confirms – and they’re not particularly long ones either. Of course, I knew all this before purchase but it’s only when you have the record spinning on your turntable that you realise just how lousy a deal you’ve got.

Basically, this is a 7” EP / single that has been etched onto a 12” record for some reason. I cannot for the life of me see the value or practicality of owning two short songs on a 12” – no matter how great they are. Especially considering that it costs almost the same as a full-length LP. I paid around €15 for this plus postage. At most, it is worth €5. And that’s stretching it. I feel like an idiot. Because I am clearly an idiot, with more money than sense.

Releases like this are of no benefit to hard-pushed consumers.