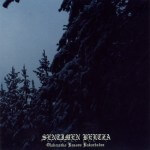 As an Irish Republican at heart, I’ve always had a soft spot for the Basque region. So, naturally, when a Black Metal band from this almost mythical part of Spain appeared on my radar, I had to check them out. Needless to say, there is a strong nationalistic vibe coursing through ‘Olabezarko Basoen Bakardadea’, which serves up six songs replete with pride, honour and idealism.

At least that’s how the music sounds… There’s no lyric sheet or anything – and I can’t translate the four non-English song titles (I can just about translate the English ones!) – but this is only a minor inconvenience (if even that) as the themes and content are all too apparent simply from listening to the music itself.

From the opening strains of ‘Miseriaren Semeak (Itxaropenik Gabe Part II)’ all the way through to ‘Nire Heriotzaren Gaua’, this album soars, carried effortlessly on a wave of pure passion and nostalgia. It’s by no means the most complicated or technical BM you’re ever likely to hear (thankfully); thus, the feeling throughout is authentic and sincere.

This realism drips from every note. There’s a punk-y element to be found on ‘My Beautyfull Misery’, whereas the ensuing title track is a forlorn, reflective slice of depressive black. From here, we are taken on a truly bleak journey, guided by sorrowful lamentations that hint at classic BM from the early ’90s. ‘Requiem For My Life’ in particular takes me way back to the magical, billowing, altars-ablaze days of yore.

Sentimen Beltza possess an uncanny, innate ability to shift seamlessly between traditional BM, depressive BM, pagan BM and just about everything in between. They’re not going to be doing any record signings in your local HMV any time soon, but these guys are master craftsmen in their own insulated little niche and I would strongly recommend you to check them out.