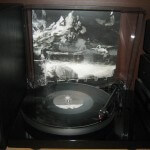 The very mention of the name Vindsval should be enough to pique your interest here. The Blut Aus Nord mainman conceived The Eye in the mid-90s and debut full-length ‘Supremacy’ was released in ‘97 (interestingly, the year after BAN’s second opus, ‘Memoria Vetusta I: Fathers Of The Icy Age’ and a full six years before the epiphanic ‘The Work Which Transforms God’).

I was going to say that, apart from the involvement of Vindsval, The Eye doesn’t really have anything to do with Blut Aus Nord … before realising that this would be a dumb statement. So I won’t say it. But I will stress that, musically, there are few comparisons between the two projects. ‘Supremacy’ delivers 40 minutes of almost-epic pagan Black Metal, very melodious and harmonic and bordering on exotic at times.

I found it fascinating to listen along to this alternate visage and I must admit the fact that the composer / executor was only 18 years old when he threw this together is mightily impressive. As ever, the album has been lovingly resurrected by DMP, with a sumptuous gatefold jacket and a fucking fucker of a poster, hehe. The vinyl edition does tremendous justice to the stunning artwork and reverently complements what constitutes a true musical curio as well as a slice of history.

Debemur Morti should have offered a money back guarantee with this record because it is extremely unlikely that anybody will purchase it and regret doing so. (Having said that, there are a lot of mongs in the world.) Worth acquiring; and I believe a follow-up album from The Eye is also imminent.