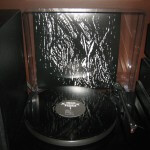 I really enjoyed ‘March To The Black Holocaust’ and ‘War Funeral March’ was reasonably good. But ‘Morte… Lune’ is a decided disappointment. Considering that this was Vlad Tepes’ penultimate recording, one would reasonably expect it to be fresher and better than the other two recent reissues mentioned above, but the opposite is the case.

The sound on here is ropey and unstable; the music is bland and amateur-ish; the playing is shoddy. It’s just lazy Black Metal that was thrown together with total disregard for the listener and very clearly captures a band that was in interminable decline. Just as well Vlad Tepes called it a day not long afterwards.

Even though it has its (oh so fleeting) moments, I can derive no joy from owning a recording as sloppy and careless as this and the fact that I bought in on the more-expensive vinyl format serves to amplify the insult. Nous sommes Satan, my arse.