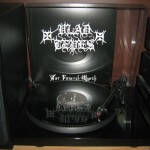 ‘War Funeral March’ was first released as a demo tape in 1994. It’s only 20 minutes long but there is some truly fantastic Black Metal to be found on this ‘til-now hidden gem. As far as I’m aware, this is the first time it’s been made available on vinyl and I suppose that makes it a historic release is some ways (maybe).

Drakkar has endeavoured to produce a decent-value record with the four cuts from the ‘Rehearsal Winter ‘93’ demo thrown in as a bonus on Side B, bumping the whole thing up into something approaching proper full-length territory. A nice eight-page A5 booklet is also included so, all in all, there’s plenty to get you chops into.

While adding in the bonus tracks was a good idea theoretically, unfortunately ‘Rehearsal Winter ‘93’ isn’t really much use and it serves only to detract from the overall quality of the album. But ‘War Funeral March’ is monumental stuff altogether – great atmosphere, superb vibe, classic feel to it – and certainly worth the price of admission alone.

To summarise: one amazing demo and one worthless one on either side of a landmark(ish) record.