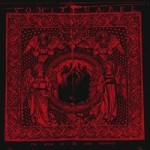 Vomitchapel is Ghoat, the same person responsible for acts such as Hills of Sefiroth, Father Befouled and the rather magnificent Encoffination, to name just three. If you haven’t yet encountered the latter, check them out immediately, especially their debut full-length, ‘Ritual Ascension Beyond Flesh’, and the recently-released ‘Elegant Funerals For The Unknown Dead’ MLP – some of the most inspirational Death Metal you’re going to hear…

How and ever, returning to the matter at hand, Vomitchapel spews out bestial, blasphemous lo-fi fare that’s a 50/50 bastard hybrid of Death Metal and Black Metal. Guttural, depraved and perverse in equal measures, ‘The House Of The Lord Despoiled’ is ugly, perverse and irreverent, tipping its festered cap at legendary virgin-ruining acts such as Archgoat, Black Witchery, Havohej and Profanatica.

The album is brilliantly executed and I’m sure it achieves everything it sets out to achieve. But it’s also ridiculously short at 27 minutes and, no matter how good the music might be (and I find it quite uninspired, to be honest), this is a massive let-down. For that reason alone, I’m not going to recommend Vomitchapel’s debut. A nice tribute, but nothing more.