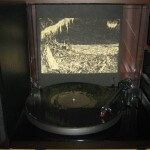 ‘Hammer Of Night’ is a fairly difficult album to get in to. Gotta admit, these six songs are much more inaccessible than I was expecting. The sound is dense and shrill and thin and at times the album seems almost like a meaningless, crude racket. However, if you have the time and patience to persevere with this record (which you should have, if you’ve paid for it!), the rewards could be great.

Harsh odes to isolation and desolation fizz through the speakers and it takes a lot of listens before you can detect – and fully appreciate – the myriad of subtle, delectable melodies flitting about beneath the surface. Singing from roughly the same hymn sheet as fellow American underground dwellers Ash Borer and Fell Voices (comparisons with the over-rated Krallice also abound, zzzzzz…), Yellow Eyes have concocted an intriguing slab of USBM that both challenges and enchants.

A decidedly different strain of Black Metal than what we’re used to; check these New Yorkers out if you want to hear something unique, claustrophobic, dismal and nigh on overwhelming.