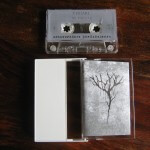 Here’s a style of Black Metal I haven’t experienced often. Belgian duo Yhdarl opt for a spontaneous-sounding, improvised brand of droning, chaotic blackness that’s at times extremely difficult to digest. ‘The Essence II’ – their sixth full-length – is genuinely headache-inducing madness which treads a dangerous thin line between being great and being unlistenable.

Even though I found this tape to be hard going (not often I say that), I’m prepared to give Yhdarl the benefit of the doubt and conclude that ‘The Essence II’ is more than mere lunacy. Like an extreme, blackened version of Khanate, this music is extreme in every sense, getting right under your skin, unnerving you. It’s like the soundtrack to your worst nightmare. In fact, I could imagine this being used by interrogators to detract information from even the most seemingly-unbreakable of witnesses. Ten hours solid of this and even Satan himself would spill the beans and run home crying to mammy with his tail tucked between his legs.

Not much more to say about this: four songs, with a total time of close to an hour, of demented, feverish black drone that could conceivably rip the skin from you face. As ever, the cassette is available for a mere pittance so the price of admission is so low that purchasing ‘The Essence II’ could barely be construed as a gamble. Give it a go if you want to hear something truly crazy. But, be warned, this is not for everybody – far from it, in fact!