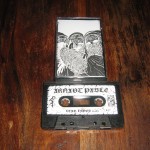 Just what the world needs: another Black Metal band out of Finland. I’m not even being facetious here: I genuinely believe that the more Finnish filth we have at our disposal in this life the better. As for Arnaut Pavle, I know absolutely nothing about this entity except that the cassette has been issued by the cleverly-named Vlad Tapes and is limited to 53 copies. So, doing the maths, if all my regular readers purchase a copy each, there should be 50 left.

The sound on this self-titled release is really good a) for a demo and b) for a tape. A lot of MCs tend to sound like utter crap and I fucking hate when that happens. But ‘Arnaut Pavle’ is okay sound-wise (within reason). And music-wise. The seven songs offered (same dose repeated on both sides) pummel along mercilessly and without remorse, like a rampant underground Watain or Urgehal. Or any one of a thousand other bands who perform in a similar vein…

So, should I criticise the fact that there is nothing particularly remarkable about ‘Arnaut Pavle’ or celebrate the fact that there’s nothing unremarkable about it? I’ll plump for the latter. After all, the reason I’m doing this is because I love Black Metal and here’s another fine proponent of the dark arts from the Northern wastelands of Europe, demonstrating all the right moves.

Very short; very affordable; very impressive. On the strength of this cassette, Arnaut Pavle should have no problem securing a reputable label to assist with future endeavours.