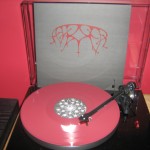 I was a bit slow on the uptake with Ash Borer, only discovering them rather belatedly through their exceptional split LP with Fell Voices, which was released by Gilead Media a couple of months back (and is also an essential purchase). Thus, I missed out on the original incarnation of AB’s debut album – the cassette version released by Psychic Violence Records (frontman Kyle’s own label, I think). I was therefore greatly relieved and overjoyed to learn that Pesanta Urfolk would give this music the glorious vinyl treatment it richly deserves. A copy was promptly ordered and – despite the high postage cost from the USA – I have no regrets whatsoever about this purchase. In a word, this record is stunning.

Originally committed to 2” tape at Shipwreck Studios in Oakland, California towards to end of 2010, the three tracks that constitute ‘Ash Borer’ are powerful enough to take your breath away. Lengthy exhibits of what is nowadays known as Cascadian Black Metal, they will leave you gagging for more. Similar in feel to bands like the aforementioned Fell Voices and WITTR, Ash Borer deliver raw, emotional BM with more peaks than the Alps, more highs than a party at the Playboy Mansion. Repetitive, simplified, rumbling and oh-so-captivating, this is how Black Metal should sound in 2011. The Europeans may have invented Black Metal but I think they’ve missed a trick creatively speaking.

‘In the Midst of Life, We Are in Death’ and ‘Rest, You Are the Lightning’ are the two songs on Side A. The former lasts for around twelve minutes and will keep you engaged effortlessly as it switches between all the motions on the darkness spectrum, while there is barely a pause for breath before the latter erupts magnificently through the amp, into the speakers and into thine ears. The incredible 20-minute ‘My Curse Was Raised in the Darkness Against a Doomsday Silence’ on Side B is the coup de grace, an extraordinary work of underground Black Metal that can rub shoulders with the genre’s greats.

In short – without wishing to be overly dramatic or sensationalist – Ash Borer are one of the most exciting new Black Metal bands to emerge in the past decade and this record is utterly mandatory in every way.