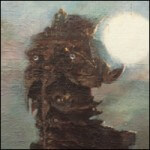 The band name is a real curveball, which in a twisted sort of way is ideal because Ave Maria certainly isn’t your conventional Black Metal act. Reference points are difficult to think of; they remind me a bit of Slagmaur, somewhat of Arcturus (but not much); a little like that French band fronted by Jack D Ripper (Morgul, I think); also maybe a restrained version of Dodheimsgard. Not the kind of album I’d normally purchase but, I have to admit, surprisingly enjoyable, all the same.

It comes in a nice digipack with lyrics etc. included so you can read just how messed up these guys are. The artwork is probably the most atypical BM you’ll see, with nary a trace of the usual darkness. Just weird: a cat on the back and a whatever on the front. All the songs are either mid-paced or slightly on the faster side of mid-paced and there’s not a great deal of variation to my ear (not that variation is necessarily a plus) – strange, psychedelic Black Metal with a fairly clean sound / production and an almost Death Metal feel to the vocals at times.

This is good but I have some reservations. Ultimately, I think the album falls a little short of delivering on the band’s undoubted potential. It starts off really impressively but never grows and in the end becomes tedious and – surprisingly – predictable. These Germans are oddballs, no doubt about it, but I believe their music could be much, much odd-er than this. A reasonable effort that could have mainstream appeal but along the way, it all becomes too safe for the underground fanatics.