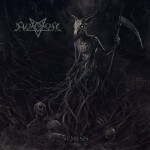 “Nemesis” will be the ninth studio album from the Finnish Azaghal and I have to say all the material I’m familiar with from their back catalogue is mightily impressive. I own maybe four or five of their previous full-lengths in various formats and they’re solid affairs. The new one is equally commendable for the most part but is tainted by my old pet hate – the clean vocals. Granted, they only appear sporadically, on two tracks, I think, but this is enough to leave me gnashing my teeth in disgust.

When it comes to singing in this style, occasional is way too often for my liking. The title track, for example, is ruined and I’ll always be at a loss to understand why otherwise grim, genuinely unnerving bands like Azaghal spoil their work by including such passages. I understand it’s for variation but whatever about some ambient instrumentation here and there, choral vocals don’t work on a Black Metal album. Never have done; never will. If I want that kind of shit I’ll buy Opeth or the latest Burzum.

Anyway, you may not mind it and, as I stated, it’s only evident in very small doses. Otherwise, the album is excellent, with some great eerie parts, a massive sound and everything that Azaghal stands for honed to perfection. It could have been a really great release but, in the end, I can take it or leave it, to be honest. With no clean vocals on “Nemesis“, I’d have given it a hearty recommendation. But some of the singing drags it down to a poxy enough level, unfortunately.