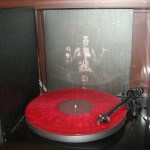 Arriving with neither hype nor fanfare, Behexen’s fourth full-length is one of those albums that could easily slip under the radar. It would be a shame if that were to happen, however, as ‘Nightside Emanations’ is as solid and competent a Black Metal record as you’re likely to hear in these days of banal and humdrum inoffensiveness. Behexen are masters of their craft and – even though this isn’t their best album – it’ still a hell of a lot better than most of their so-called peers.

The real clincher is the sheer quality of the vinyl edition, which (as is always the case with DMP) looks, feels and sounds magnificent. A 16-page booklet is attached to the gatefold cover and the whole unit is truly a thing of absolute beauty. (I bought the CD edition too and it also looks pretty stellar.) Aesthetically, this is one of those records that you will be proud to own. The artwork and presentation are of the most supreme calibre possible and they elevate the album to heights that it might otherwise have failed to reach.

Not that the music is bad, mind you. Far from it, in fact. There are 50 minutes of superior Finnish Black Metal on here, all of which has been cleverly conceived and delightfully executed. Mostly mid-paced and creepy as hell itself, ‘Nightside Emanations’ is a surefire winner from start to finish. I would particularly recommend this to anybody who appreciates Gorgoroth or Watain.  Masters paying homage to their master, this is one of the safest purchases you’ll make this winter.