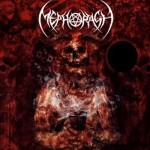 This is one of those easy-to-review albums that isn’t necessarily doing anything new but is nevertheless a fantastic listen as it delivers eleven stellar tracks of prime Scandinavian Black Metal with no obvious weakness. The production is grand, allowing the music to power through the speakers with force and intent and I would have no hesitation in recommending this Swedish band.

For the most part, ‘Chalice of Thagirion’ is unrelenting in the manner of a Watain or a Behexen but there is also some nice variety to be found on the album, which breaks up the monotony enough to encourage me to opt for repeated listens. There’s nearly an hour’s music on here and it rarely gets boring, showcasing harsh musicianship and grim vocals of the highest order.

Mephorash might be relatively unknown at present but, on the evidence of the entertaining tour de force that is ‘Chalice of Thagirion’, I believe this could change quickly. This is a solid offering of fierce blasting blackness with plenty of atmosphere and subtle diversions included to keep a smile on your face as you bang your head in total darkness. Like I said, nothing new … but old is better.