Skip to content
Black Metal Reviews
April 10, 2011April 10, 2011 Gerald Robinson 0 Comments Blood Of Kingu, Sun In The House Of The Scorpion, Back On Black 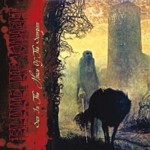 Ambient apéritif ‘Herald Of The Aeon Of Darkness’ ushers the album in with nary a sign of the chaos to follow; ‘Those That Wander Amidst The Stars’ and ‘Cyclopean Temples Of The Old Ones’ are pummelling exercises in harsh, face-splitting Black Metal designed to blow your head off with an avalanche of power, pace and all-out violence. I haven’t listened to it in a while, but I don’t remember Blood of Kingu’s stellar debut full-length ‘De Occulta Philosophia’ being quite this intense.

The second and third cuts on this LP are stunningly potent, proving the Hate Forest offshoot to be masterful exponents of both ferocity and atmosphere. The final tune on Side A, the ten-minute epic ‘Incantation Of He Who Sleeps’ maintains the very high standards, arriving with a more mid-paced attack, showcasing some superb growling, rasping Death Metal style vocals, all coming through crystal clear thanks to the excellent production. Otherworldly squeals and hollers in the background help create a thick texture, adding extra layers, culminating in a balanced and rounded finished product.

There’s not  a lot of let-up this record, which remains predominantly aggressive, but when BOK do feel fit to take their hooves off the gas – such as in the closing seconds of Track #4 – the ambient interludes add vastly to the overall canvas, not unlike a BM version of Nile perhaps. ‘Guardians Of Gateways To Outer Void’ is like a faster, more chaotic version of Clandestine Blaze, leaving dust and debris in its wake akin to the random violence of acts like Brutal Truth in days of yore. It’s that extreme.

The band’s trademark shamanic leanings are plastered all over the crushing ‘Ceremonies To Awake Thy Ageless Hate’ and tribal percussion-led instrumental ‘Morbid Black Dreams Bringing Madness’ before an exceptional rendition of the Beherit song ‘The Gate Of Nanna’ – delivered in inimitable Blood Of Kingu style – rounds the journey off on a glorious high. This is a fantastic record and the awesome artwork – magnified in 12×12 format – renders the gatefold LP version utterly essential.