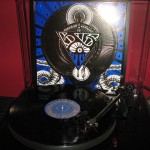 ‘The Desanctification’ is the second part of Blut Aus Nord’s ongoing 777 trilogy of albums. It’s also their ninth full-length in total and the sixth since the French band reinvented itself and changed the face of Black Metal forever with 2003’s groundbreaking release ‘The Work Which Transforms God’. Since then, BAN has been a unique presence in Black Metal in that their sound is innovative, inimitable and utterly superb.

Vindsval’s vision is immense and I’m at a loss to understand why the scene isn’t cluttered with a host of second-rate Blut Aus Nord clones. Perhaps it’s because what BAN does is so unusual, it would be impossible to recreate or copy. Certainly, for whatever reason, Blut Aus Nord has been a trailblazing entity in BM for close to a decade now and ‘777- The Desanctification’ is a worthy addition to their extraordinary canon.

I’m not overly concerned with how this album fits within the overall context of the 777 concept or how it compares with this. I prefer to treat it as a separate record in its own right. As a stand-alone release, it is arguably slower and more atmospheric than a lot of what went before it but ‘777 – The Desanctification’ remains unmistakeably Blut Aus Nord – a chugging, swirling behemoth of urban filth and psychological decay.

As ever, not-so-subtle industrial elements are evident in a landscape that is both harsh and sumptuous. It’s easy to get lured into a false sense of security only to then have your ears blown out through your arse by an outbreak of violence. The conception and musicianship are second to none but what really seals this deal is the incredible presentation and attention to detail from the label, who have produced one of the finest-looking records (complete with colour on the inside of the sleeve!) you will ever see – or hear.

Obviously, this is mandatory in every way.